Turkey is holding local and regional elections on 31 March in what polls suggest could see the ruling Justice and Development Party (AKP) of President Recep Tayyip Erdogan lose ground across all major urban centres, including Ankara and Istanbul.

Observers have noted that the election is being seen by many a referendum of Erdogan’s Islamist rule.  As that question further polarises society, the opposition could find itself capturing several key elections in places where they’re had little success in recent years.

The opposition-backed candidate running for mayor of Turkey’s capital Ankara, Mansur Yavas, said on Sunday that he is leading eight points ahead of the AKP-backed Mehmet Özhaseki.

In an effort to draw attention from the country’s worsening economic situation, Erdogan has launched an all-out assault on the secular elements of society by leading a deeply divisive religious campaign where he has resorted to showing images of the Christchurch Mosque massacre and made suggestions that he plans to turn the former Byzantine basilica of Hagia Sofia back into a mosque, “so that everybody can visit it without charge.”

The 1,500-year-old UNESCO heritage site, once the largest cathedral in the Christian world, has been a museum since 1935.

AKP government ministers and dignitaries have ramped up the “West versus Turkey” rhetoric by saying they could resort to an old third-world tactic where they would question the election results if the AKP loses.

Members of the opposition have been openly threatened with prosecution and imprisonment by Erdogan and AKP, with Foreign Minister Mevlut Cavusoglu accusing Nation Alliance candidates of links to terrorist organisations. 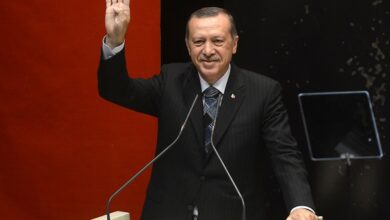